March 6, 2011 By EGGO Comments are Off ARCHITECTURE, DESIGN

Science-Fiction is past – Green-Fiction is the future. Lately we have seen many architectural projects that can easily be thought as taken right out of science-fiction, being developed by architects and engineers all around the world.
While some of them are more or less exciting than others, a few are representative. One of them was DSBA’s project for the Taiwan Tower that we posted a few months ago.

Today we would like to introduce you to an older project whose construction has been postponed. The Filene development from downtown Boston was halted in 2008. Although the main structure of the building is up and standing, nothing more has been done in almost three years. On the existing skeleton, Höweler + Yoon Architecture and Squared Design Lab came with a proposal taken from SF movies, and one that we should get used to in the near future. So where is the reality and where is the Science-Fiction? Well, the whole building will be based on so called “eco-pods” that will produce bio fuel than used to sustain all the energetic consumption and necessities of the building.

And here comes the more unusual part of the design: while the eco-pods do their job producing bio-fuel, robotic arms will take them and place them in different spots of the building, in order to maximize production where needed. In the remaining spots where eco-pods used to stay public spaces and green parks will be arranged.

So this is where Science-Fiction meets Science-Fact, creating not just reality from imagination, but taking it a step forward towards a greener, sustainable and more efficient future. 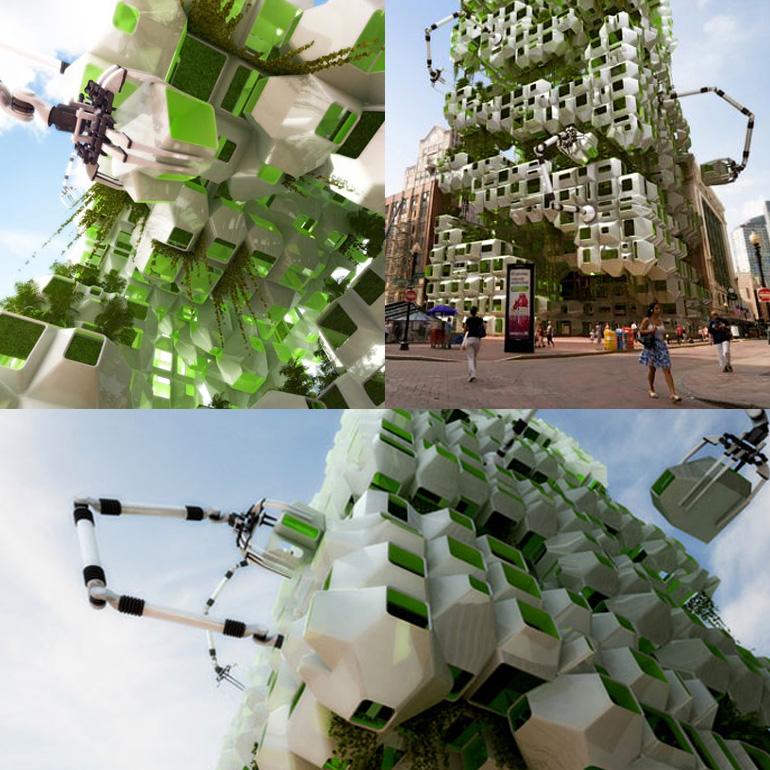